Congratulations to “The Cleanup Crew,” winning team of the 2022 Engineering Physics Robot Competition

Robot “Garbage Truck” gets the job done for The Cleanup Crew at the annual UBC Engineering Physics Robot Competition. 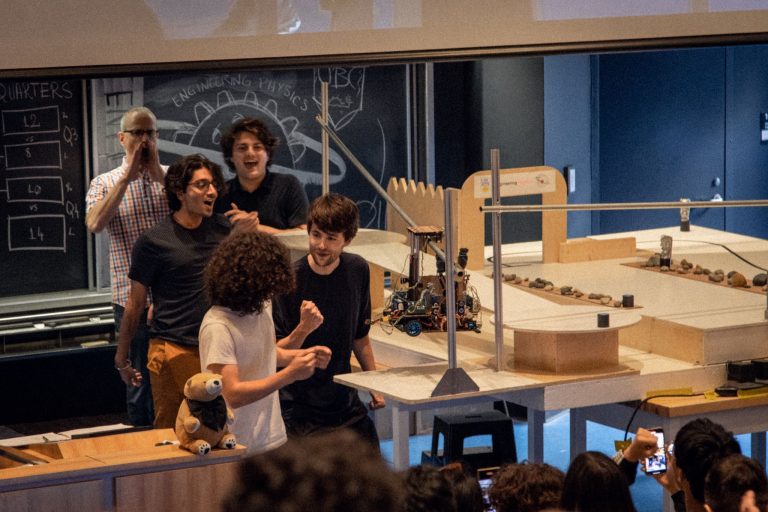 Christian Turpin:  “We are thrilled to be this year’s winners!”

Following two years of more isolated team work during CoVid restrictions in years 2020 and 2021, the annual competition returned in person to the Hebb Theatre on August 11, 2022, to a very enthusiastic crowd.

ENPH 253, Introduction to Instrument Design, is a core course in the first year of the Engineering Physics Program. The course begins with lectures and some hands on learning in the first week of Summer Session in May. By early July, students have formed into teams and begin building their robots.

When designing the robot, we had to come up with a method to cross the gap in the course. The most popular methods were dropping a bridge for the robot to cross or extending a mechanism to lift the robot off the ground and drive along the zip line. We opted for the latter method as we foresaw that dropping a bridge would pose navigational difficulties that would outweigh the mechanical complexities of creating a zip line mechanism. Additionally, creating a zip line mechanism allowed for our entire robot to make it to the finish area instead of having to drop the idols off the platform into the finish area.

In the first 2-3 weeks (before time trials), we focused on perfecting the robots most important functionalities: driving, using encoders to maneuver, picking up idols, and getting through the arch. Our simple chassis allowed us to begin testing immediately.” 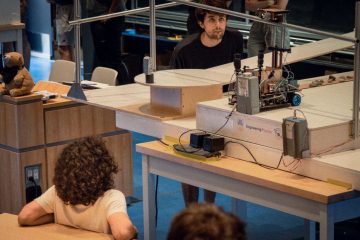 Christian: “After time trials, we implemented the infrared following system and added the zip line mechanism. By ensuring essential aspects of our robot were working before time trials, we gained more time to refine the more advanced features.”

The methodical and thorough approach of The Cleanup Crew paid off.