The competition was a hackathon for teams of four to create a project tackling any problem they wish within a 24 hour period.  This was an official Major League Hacking event, held at Drexel University in Philadelphia (Feb 22-23)  with their iteration of the hackathon being called “Dragonhacks 2020.

Edmund Chan:  “Since the competition was in Philadelphia, quite far from me, I sent a message on a group Slack channel for the event, to find teammates.  Luckily enough, three other university students were in the same situation so we decided to form a team.

In the weeks following up to the event, our team agreed that we wanted to solve problems that were caused by emergency disasters.  After some research on common tragedies, we learned that although building fires in North America have gone down, the number of deaths from each fire has risen.  This means there are more and more deaths per fire every year.  The leading cause of these fatalities were people being unable to escape from the building.   As a result, our team decided to work on improving traditional fire escape infrastructures, which primarily consisted of only red EXIT signs mounted on ceilings.

We immediately got to work, hashing out our project idea.  Work was divided up in a way that suited our skill set.  We began coding up some rough programs to capture our project design.  Our group’s final product was “DirExit”, which is short for directional exit!

The hardware component, “DirExit” is on the left, with the localized server running algorithms on the right. The computer screen shows a simplified floor plan with the highlighted green as the route to take to exit the building from the dark green start.

DirExit is a comprehensive safety solution that builds on top of existing EXIT signs.  DirExit is capable of detecting dangerous paths, routing occupants in the building efficiently, and tracking human traffic in real time.  The basic functionality of the DirExit sign is to use tracked sensor data such as temperature and video alongside machine learning to determine if a pathway is unusable.  The data is then sent to both Google Cloud to exploit cloud capabilities and also a localized server that would then calculate the fastest route for egress from the sign’s location using a preloaded floor plan.  The server sends back the route to the DirExit sign, which then lights up the correct LED indicator to signal which immediate path occupants should take.

Below, we are receiving our first place overall medal and posing with the prizes that we selected from the prize pool:  Nintendo Switches, an Apple Airpod, and a 55 inch TV.” 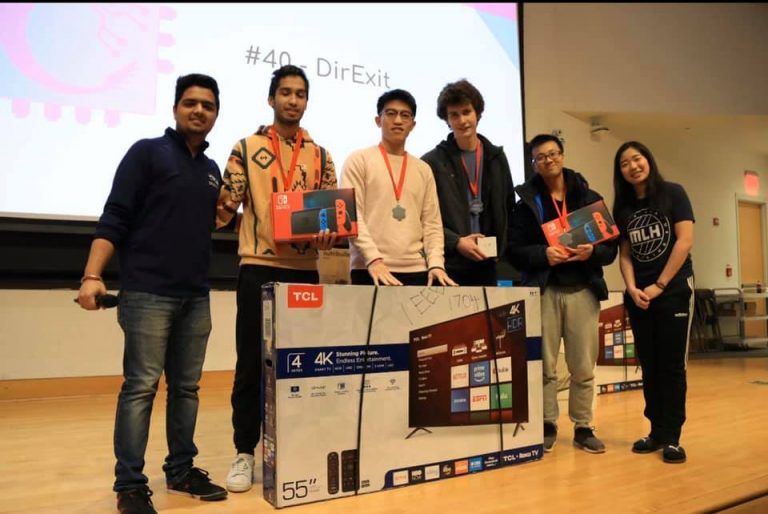