Inspiration and Innovation: Michael Ko and The Eva Project

Daniel Ko has had Duchenne muscular dystrophy since childhood.  By the time he was 8 years old, he needed a wheelchair.  Now 28, Daniel has speaking difficulties which result in Google Assistant no longer recognizing his commands.  Daniel’s younger brother, Michael Ko, a 4th year Engineering Physics student, “realized that with a voice assisted device he could continue using Google Assistant and keep some of his independence.”

Michael Ko:  “The AI, Eva, was created back in 2018 when I first built the voice-recognition system for my brother. This year, I’ve upgraded it so that it can control his wheelchair.”

Eva was named after a character in their favourite movie, Wall-E.

Michael Ko:   “All the mechanical components were created using 3D modelling software and then 3D printed – I actually got this idea from our Second Year ENPH Robot Competition (ENPH 253)!  Before then I had no idea how 3D printing worked but through the summer I got more experience using it.  I bought a 3D printer after the competition to do some personal prints, and ended up using it a lot for my Eva Project. So there’s a big thank you to ENPH Year 2 Summer!

I’ve also designed custom circuits and PCB boards for the project – I’ve had these manufactured by a company and then I’ve integrated them into the current system for testing.” 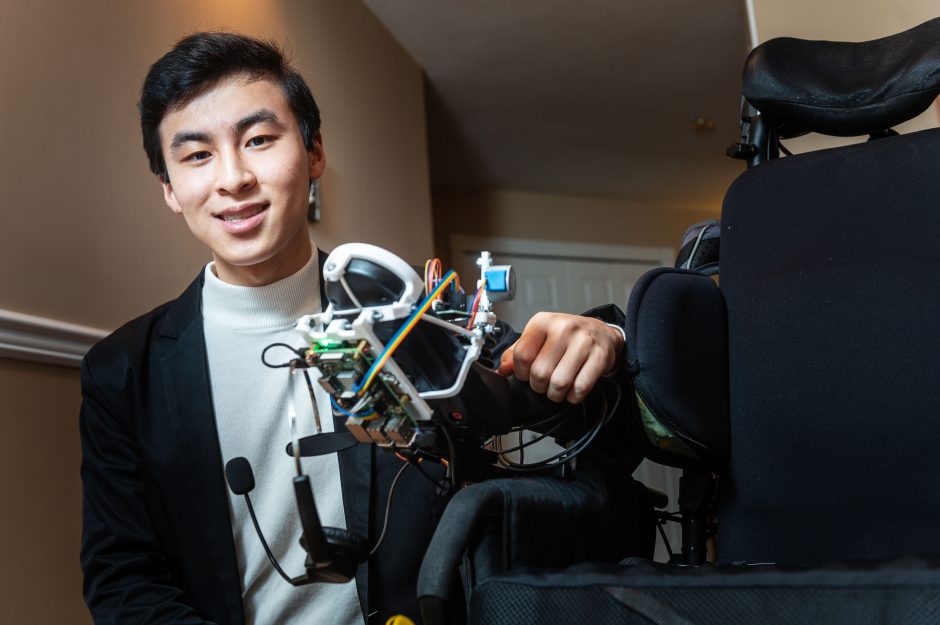 Test runs in the house are continuing.  Michael anticipates there will be a new version of his project soon.

Michael Ko:  “The final goal is to have two driving modes: voice-control and self-driving. Currently, we’re working on the voice-controlled aspect of it but eventually the goal is to have my brother say a command like “kitchen” or “room”, and the wheelchair will navigate itself through the house to the destination. The custom circuits I made will be used to detect walls and help localize the chair in the self-driving mode, but that’s something I’ll work on after making sure the voice-controlled wheelchair is complete for my brother.

The courses I took so far in Engineering Physics provided me with an important foundation which I built my project upon.

Engineering Physics provides an environment for innovation and creativity, and the fact that the people within the program are so supportive has really encouraged me on my journey. My good friends in Engineering Physics like Dvir, Kota, Donney, and countless others have always supported me and I’m really thankful for them! I hope more students will take an interest in UBC Engineering Physics.  It’s truly an amazing program, not just as an academic major but also as a community!”