Below, Nick Bratvold explains how the competition worked. 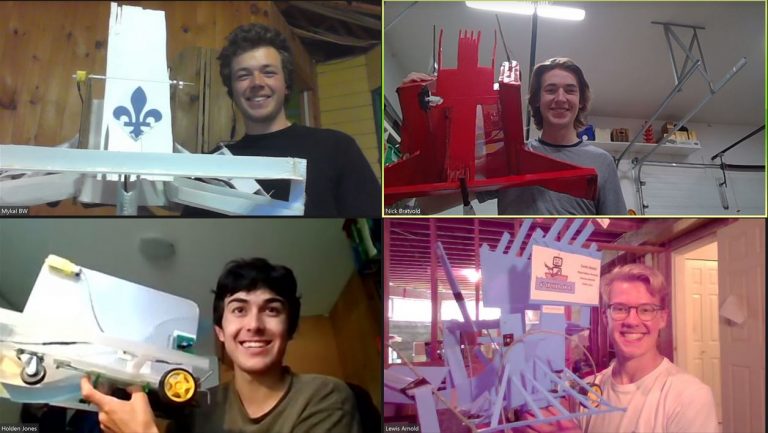 Nick:  “Our competition was run similar to the World Cup. There was a round-robin stage consisting of 16 teams of 4, split into 4 pools. Each team played two matches in the round-robin and the top 2 teams from each pool advanced into quarter-finals and then semifinals and finals. The difference this year was that each team member built their own version of their team’s design. In each match two teams battled head to head with the robots attempting to collect  6 randomly placed cans and place them in a recycling bin within a minute. The score for the match was determined by the average points scored by each team.

Scoring for one robot is as follows:

1 point will be awarded for every soda can returned to the bin within 1 minute. 2 extra points are awarded if at least two cans are starting in different orientations (one upright, one lying down) are returned to the bin within the minute. One extra point overall is awarded if the bin walls are 8” or higher and at least one can is collected. Cans only score points if they are fully in the bin as determined by the judges, and would stay so even if the robot was moved away from the bin. There was a separate competition where each team had to do an entertainment portion with their robot that was scored from 1-10 by our class.

The finals were extremely close. We won 7.75 to 7.5. Our team had actually collected fewer cans than the second-place team but we had an 8” recycling box which gave us an additional point.”